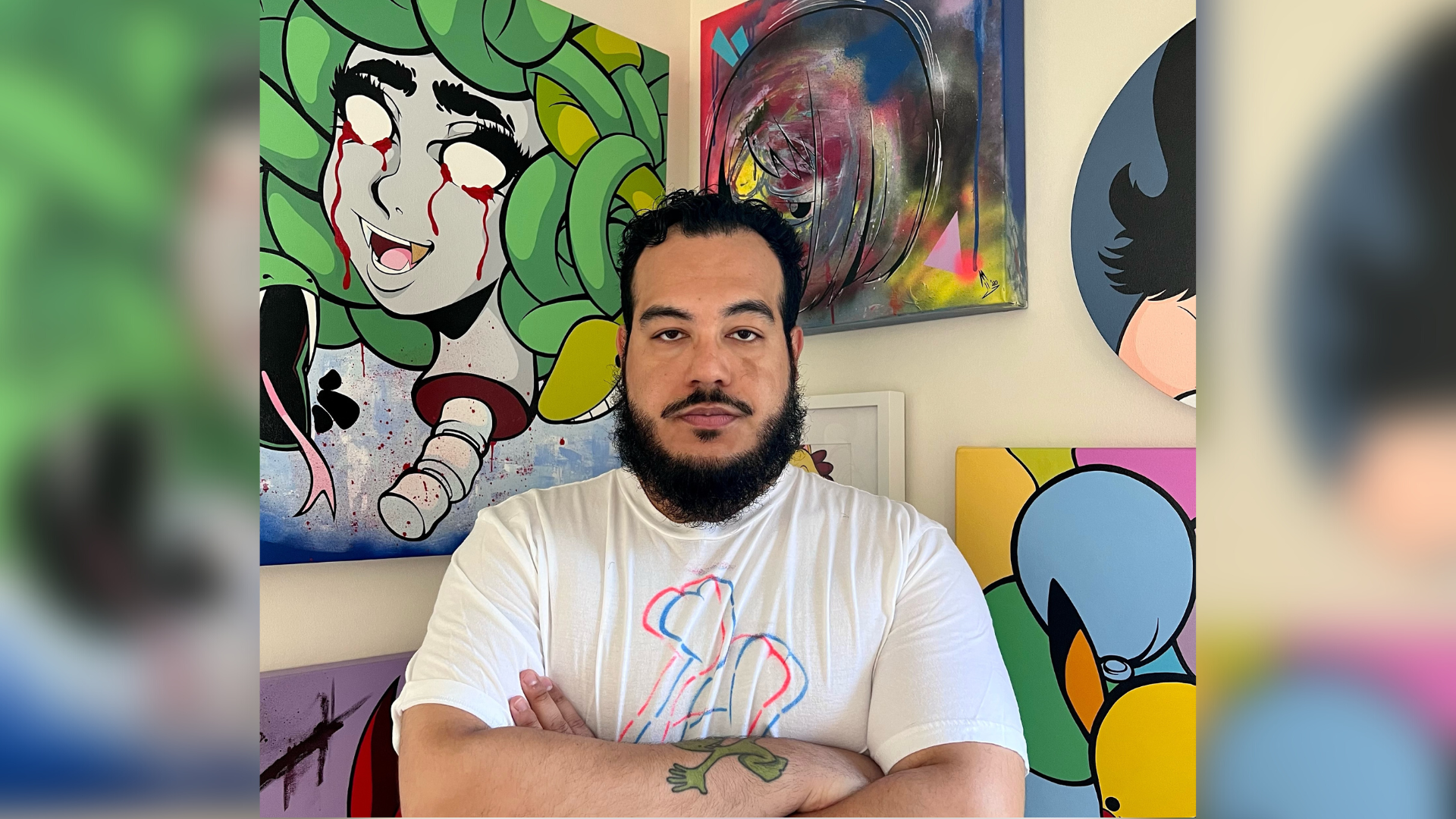 His third-grade year was when he created a character that has continued to inspire him and follow him throughout his career, the Kekun Frog. This design depicts a Japanese-inspired frog with black eyes and a large, white, toothy smile.

Another artist that inspired Mike’s passion for art was his grandfather. Mike recalled how his grandfather was a custom jewelry maker and oil painter. He’d paint scenery and “weird contemporary styled work” as Mike said in our interview. “Still to this day, I can’t tell what he meant by it, but I love it anyway.”

When asked about his creative process, Mo$es explained his inspiration behind some of his more recent artwork: “Recently, I’ve been trying to really sit myself down and search subjects I’m interested in. I’ve been diving into worldwide mythology, whether it’s religious or not. I’ve also been touching on old rubber hose cartoons from the early 1900s, you know, trying to play with different characters that nowadays would be deemed inappropriate, but bringing them back in a way where people can appreciate them for what it was.”

Mike also explained that there’s a lot of Japanese and comic art influence in the way he creates, mixing many artistic styles to create his own unique product of contemporary art.

One of Mike’s biggest motivators to create is that he’s been able to accomplish his goals on his own. Because of his dedication to his craft, Mike studied different materials, styles, and artists throughout his artistic journey. Despite not having formal training, he’s learned a variety of styles and has seen himself grow into the talented artist he is today.

All Mike Mo$es ever wanted to do was draw, he explained. Since elementary school, he always carried a sketchbook with him, drawing and experimenting with different styles and approaches to the characters he wanted to create.

Though Mike has created with several materials and learned different layering techniques, his current favorite method of creating art is painting. Even if he draws an illustration with watercolors or an alcohol-based marker, he always comes back to outlining with acrylic paint. He loves the way the acrylic paint sits on the surface of his pieces, brightening and tying the finished product together.

On Mike Mo$es’s website, you can watch time-lapse videos of him creating his illustrations and artwork. He likes to record himself creating for two reasons, he explained. The first reason is for archival purposes. Mike has already been able to see progress through his work and will continue to see progress as he learns more, creates, and focuses on his craft. The second reason is to show other’s his process of creating, that it’s not just instant magic, but takes time and skill.

He explained that he mixes all his colors, never using color straight from the jar. His videos are proof of his growth, talent, and skill as an artist. Mike loves that people enjoy watching him create and continue to produce these videos so his customers can see the progress of each of his pieces.

Recently, Mike Mo$es was commissioned by SNL and comedy star Kenan Thompson, creating a series called “The OG’s” of 24×24 inch canvases of Thompson’s favorite old film characters. He was able to create images of these characters by adapting them to his Japanese style, incorporating the black eyes and huge smile of his favorite character the Kekun Frog in each of his pieces.

When asked about why the face of his character Kekun Frog is in many of his pieces, Mike said this: “I started the character Kekun Frog in the third grade, funny enough, and he went through so many different design iterations whether it was major or very minuscule to make a difference. From there, I just started drawing the faces onto these characters. I started doing that more in college when I was more exposed to different pop and contemporary artists.”

Mo$es explained that one artist who inspired him in his artistic journey in college when he got more serious with his art, was a Chinese contemporary artist, Yue Minjun. Yue Minjun’s style was based on self-portraits where the subject was always smiling. This inspired Moses to integrate his Kekun Frog similarly into the majority of his pieces.

“I noticed my character Kekun Frog always smiles, no matter what, and putting a smile on everything is playing on the idea that everybody else tells you, ‘you should smile more’ or ‘what do you have to be sad for?’ or ‘why are you sad?’ like people don’t have reasons be upset sometimes. Not everybody is 100% happy all the time, so it’s almost like my quote-on-quote spit-back to the world.

In addition to his commissions and support from Kenan Thompson, several other celebrities have purchased pieces from Mike Mo$es like Kendrick Lamar, Leslie Jones, west-coast rapper Kurupt, Chance the Rapper, Andy Garcia, Pete Davidson, and Miley Cyrus to name a few.

One of his favorite parts about being an artist is being able to show and prove his growth through his craft, which has given him creative freedom as an artist. His work is all hand-done and allows him to express himself in a valuable and artistic way.

One of the most rewarding parts of his career is how people react to and appreciate his art. Mike loves that he’s creating a following and growing in his career as an artist.

Here’s Mike Mo$es’s advice to any aspiring artists: “Keep going because somebody else is doing more work than you are whenever you stop. Never give up, and dive in headfirst. I went headfirst into this because this is what I really knew I wanted to do. Practice— practice makes perfect.”

Mike Mo$es recalled how he had to put in a lot of work to get to where he is today in his career, and he knows there is more work ahead. Though being an artist is his full-time job, he rarely has a day off.

He said, “Even when I’m supposed to have a day off, I find myself doing research on a piece I want to work on later in the week or start sketching canvases. I’m always working. It never stops, but at the same time, this is what I want to do.”

Mike’s journey shows that hard work, passion, and dedication pay off as many exciting opportunities are coming up this year including a solo show, sculptural work, new merchandise, and big-name collaborations.

Follow along Mike Mo$es’s journey as a rising contemporary artist! PrevPreviousChristina Pipia: Making a Name for Herself as a Bodybuilder, Competitor, Lifestyle Coach, and Nutritionist
NextDJ Hector Romero: “When You’re Passionate About Something, You’re Never Going to Feel like You’re Working”Next
View Playlist