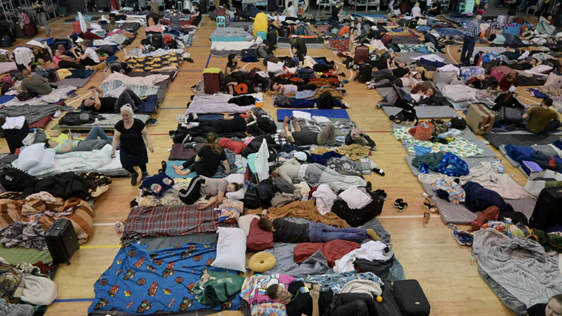 While most Ukrainian refugees prefer to stay in Europe, the U.S. government expects to use its refugee admission program, the parole system, and immigrant and non-immigrant visas to bring in Ukrainians to aid Ukrainian-Americans who wish to be able to receive their family members into the country.

Since the beginning of the Russian invasion, at least 70,000 Ukrainian citizens have entered the US. Later on, when President Biden pledged to welcome 100,000 refugees in the summer, approximately 38,000 Ukrainians received sponsorship approval through the Uniting for Ukraine program, a number provided by the Department of Homeland Security.

Since receiving their sponsorship, more than 15,000 Ukrainians have entered the US. Another 23,000 people have been approved but not yet made the journey, as travel arrangements are in charge of the Ukrainians or their sponsors.

The Uniting for Ukraine program

The sponsorship program was launched on April 21st. Since then, sponsors such as friends, relatives, religious groups, and NGOs, have started their online applications to support over 60,000 Ukrainian refugees.

People considered vulnerable, including LGBTQI people, people with medical needs, and journalists and dissidents are prioritized.

Even though in recent years the US has become increasingly more hostile to many migrants, Ukrainians have been vastly welcomed without objections. And while the sponsorship program is prepared to receive up to 100,000 Ukrainian citizens, if Putin’s invasion does not come to an end, the Biden administration might have to consider raising this number.

The number of Ukrainian refugees entering the country continues to rise, many of them doing so by using existing visas or by crossing the southern Mexico-US border. More than 20,000 Ukrainians came into the country through this southern border from March through May 25th, when the Title 42 order—expulsions at the border order, was put in place again. Since then, Ukrainians have been subjected to the same land border restrictions that are imposed on Mexicans and Central Americans.