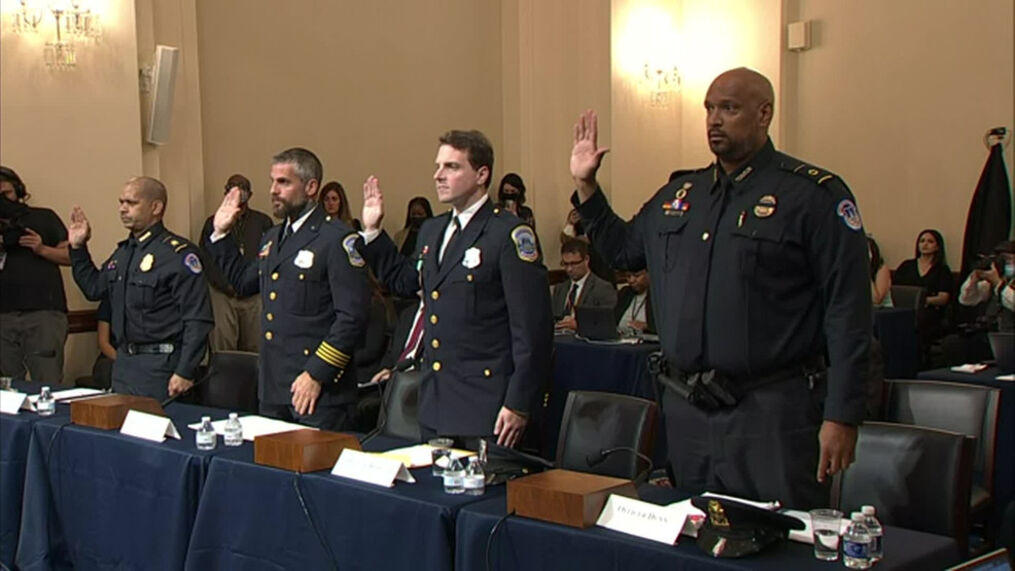 On Tuesday, The House Select Committee investigating the January 6th Capitol riot held its first official hearing. Four law enforcement officers who defended the building that day gave their testimonies and spoke up about their physical and psychological injuries that they’ve suffered.

The committee’s chairman, Rep. Bennie Thompson played the footage from the attack at the beginning of the hearing. He said that it may be hard for the officers to revisit that day, “history will remember your names and your actions.”

Capitol Police Sergeant Aquilino Gonell was visibly upset as he wiped his tears from his face, while officer Michael Fanone consoled him. Gonell said that he was beaten with a flagpole and soaked in chemical spray while defending the Capitol.

As a result of his injuries, Gonell said he had surgery on his right foot, would need surgery on his right shoulder, and will need possibly more than a year of rehab. Officer Faone said he was “tortured, dragged into the crowd, tased, beaten unconscious, and suffered from a mild heart attack and brain injury.”

Faone said that he feared for his life and told the mob, “I have kids.” He said he heard the crowd then chant, “Kill him with his own gun!” Faone said, “I can still hear those words in my head today.”

Faone continued, “What makes the struggle harder and more painful is to know so many of my fellow citizens, including so many of the people I put my life at risk to defend, are downplaying or outright denying what happened. I feel like I went to hell and back to protect them and the people in this room, but too many are now telling me that hell doesn’t exist — or that hell actually wasn’t that bad.”

He slammed the desk and shouted, “The indifference shown to my colleagues is disgraceful.”

Capitol Police Private First-Class Harry Dunn also testified on Tuesday. He said that he was assaulted and called racial slurs during the attack. According to Dunn, a crowd of about 20 people then surrounded him, he said, screaming and calling him the n-word.

Dunn sobbed and asked, “Is this America?” He then urged the committee by saying, “If a hit man is hired and he kills somebody, the hit man goes to jail. But not only does the hit man go to jail, but the person who hired them does. There was an attack carried out on January 6th, and a hit man sent them. I want you to get to the bottom of that.”

D.C. Metropolitan Police officer Daniel Hodges called the attackers “terrorists.” Hodges was seen in a viral footage screaming in pain as the rioters crushed him in a doorway. He said that his head was bashed by the rioters, and he feared that he would be “dragged into the crowd and lynched.”

Congresswoman Liz Cheney told Good Morning America on Tuesday that former President Trump and current House Minority Leader Kevin McCarthy, could be forced to testify as part of the hearings.

“This is absolutely not a game. This is deadly serious,” she said. “There are some in my party, including Leader McCarthy, who continue to act as though this is about partisan politics, I think it’s really sad. I think it’s a disgrace.”

At the New England Council and Saint Anselm College’s “Politics & Eggs” event yesterday morning in New Hampshire, Mike Pence revealed that if he was called to testify regarding the details of the Jan. 6th capitol riots in front of the committee investigating the incident, he “would consider it.” Following the loss of Trump and Biden in the 2020 election, Pence began to vocalize his lack of tolerance for Trump’s extremist attitudes.

For most, the last moment they’d announce running for presidency is hours after they’ve experienced a defeat in their home state. On NBC’s “Today” show, Rep. Liz Cheney (R-Wyo. ), who had just suffered a 37-point loss in her GOP primary on Tuesday, floated the idea of running for president in 2024.

The Worlds Food Crisis is About to Get Worse

After six months of fighting between Russia and Ukraine – two farming powerhouses – a teetering global food system was plunged into a full-blown catastrophe, leaving millions of people facing starvation. The war between Russia and Ukraine is already fueled by climate change, soaring living costs, and a fertilizer price hike that is causing the most extreme global food crisis we have seen in decades. A U.N. brokered agreement to reopen the Black Sea for food ships may not be enough to relieve millions of people struggling to eat across the Middle East, Asia, and Africa.

Why Liz Cheney Lost Support Of The Republican Party

The pending reelection of Wyoming Representative Liz Cheney, daughter of former Republican Vice President Dick Cheney, is not looking too promising ahead of the Wyoming primaries taking place tomorrow, August 16th. While Cheney formerly had an 80% approval rating and was widely adored by the GOP, support from the Republican party plummeted following her disapproval of former President Donald Trump’s involvement in the Jan. 6th capitol riots. She followed in her father’s footsteps as Chair of the House Republican Conference before being voted out in 2021 when she voted to impeach Trump following January 6th.